This thesis is to describe various methods for calculating the day of the week.  These methods include not only the traditional methods, but also newly developed methods which enable to calculate the day instantly, called “Kurukuru Method.”

What day is 2017 May 14?  Not many people can answer this question.  By using a calendar or searching in Google, you may find its answer, which is Sunday.  However, it is very convenient to calculate the day of the week without using these tools.  This thesis shows how to conduct the quick calculation of the day.

The following chart shows various calculation methods, which is prepared by the Author of this paper subjectively. 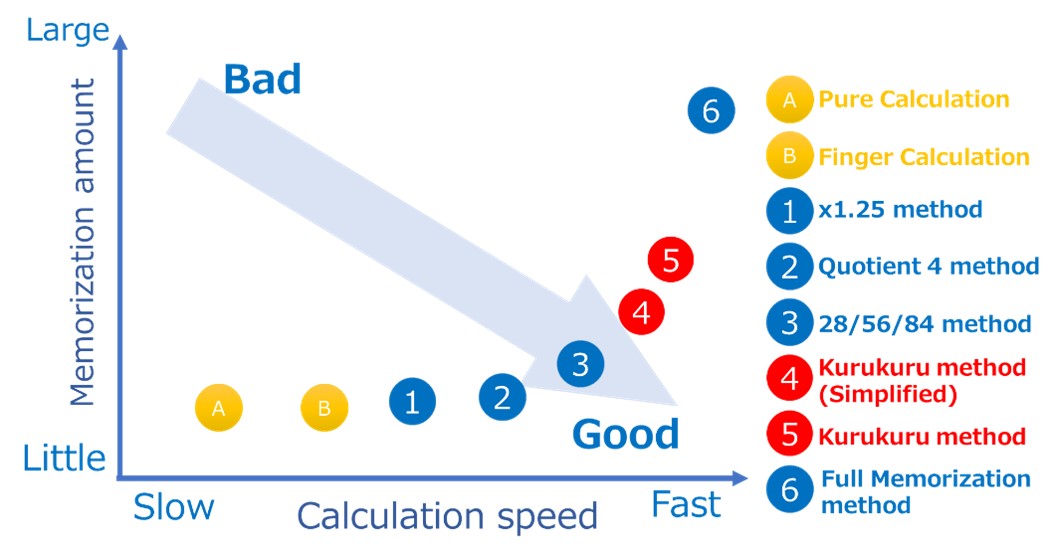 Since this type of summarization has not been conducted before, nobody has named day calculation methods.  Thus, the names in the chart, such as “1.25 method”, and “Quotient 4 method” have been determined by the Author of this paper.

The methods of A, B, 1-3, and 6 whose names have not been determined can be found on the Internet. Apart from these methods, Kurukuru method is also presented in the chart.  By using Kurukuru method which also has its simplified version, the fast calculation of the day can be achieved.  Kurukuru method has been developed by the Author of this paper.

As the name implies, people calculate Zeller’s congruence (Eq.1) by using a calculator, a pen, and a sheet of paper.  Since we only need to memorize the Zeller’s congruence, the memorization amount is not large.  However, it takes more than one minutes to reach the answer and it is not practical to use this method for the fast calculation of the day. 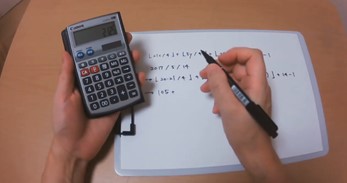 Some of Asian people, such as Japanese and Chinese, use this technique.  This method requires the sequential movement among finger nodes and joints, which results in a very long time to reach the answer. Furthermore, a mistake is easily induced in this method. 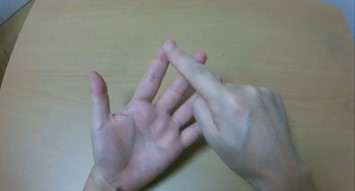 Before explaining calculation method (1) to (6), the technical terms and common rules are described.

Table 2 Characteristics of each calculation method

Table 2 summarizes the characteristics of each calculation method.  It is common to determine F2DV, MonthV and DayV.  On the other hand, the determination method of L2DV is different among each method.  In other words, the essence of day calculation is how to determine L2DV.  We should select a calculation method based on our preference.  For a person who is good at multiplication arithmetic, the person should use (1) x1.25 method, for a person who is good at division arithmetic, the person should use (2) Quotient 4 method.  Ordinary people should use 28/56/84 method.  For fast calculation, Kurukuru method is strongly recommended.  If you are extremely good at memorization, (6) Full memorization method is recommended.

Before explaining 6 method, three rules common to every method is described below.

In the case of January and February, it is regarded as “previous year”.  Here are the examples:

In the third example and the fifth example, this rule is applied.

It is assumed that ordinary people naturally memorize Table 3, after several attempt of calculation.

MonthV is determined based on the Table below. 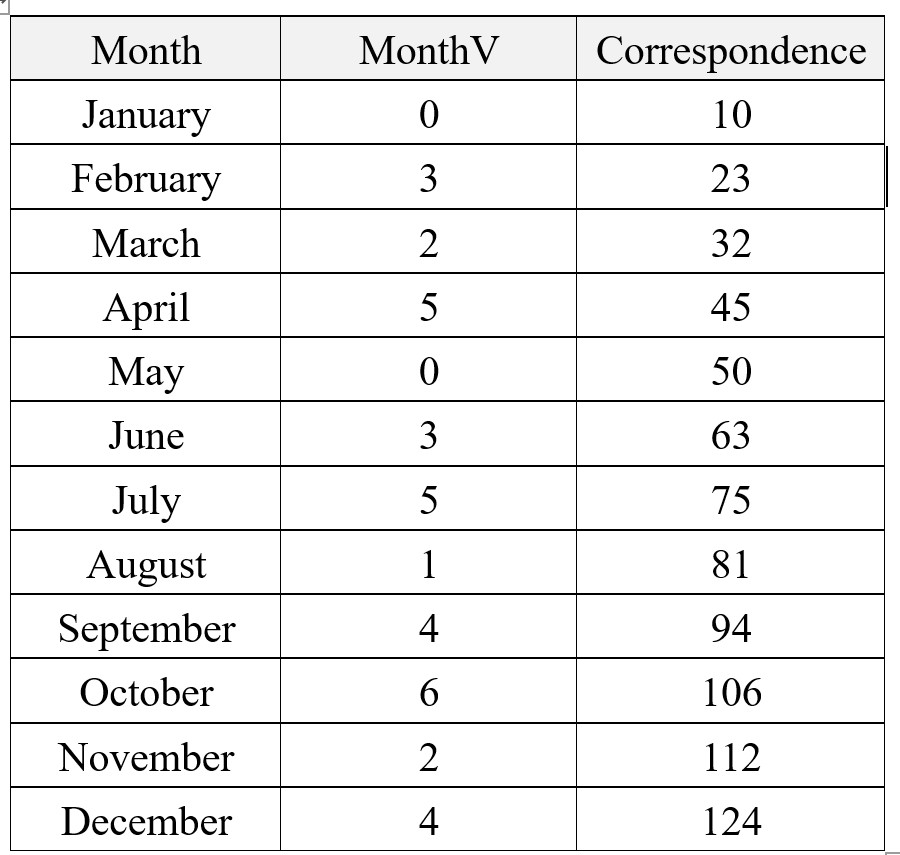 There are several ways to memorize the correspondences in the table above. One of them is use date.  For example, if your or your family member’s birthday is February 3, you memorize “23” correspondence based on that birthday.  In the same way, you should give meaning to March 2nd, April 5th, June 3rd, and so on.  Another memorization method is “major system”, which will be introduced later.

The following is a summary of rules described in this section. 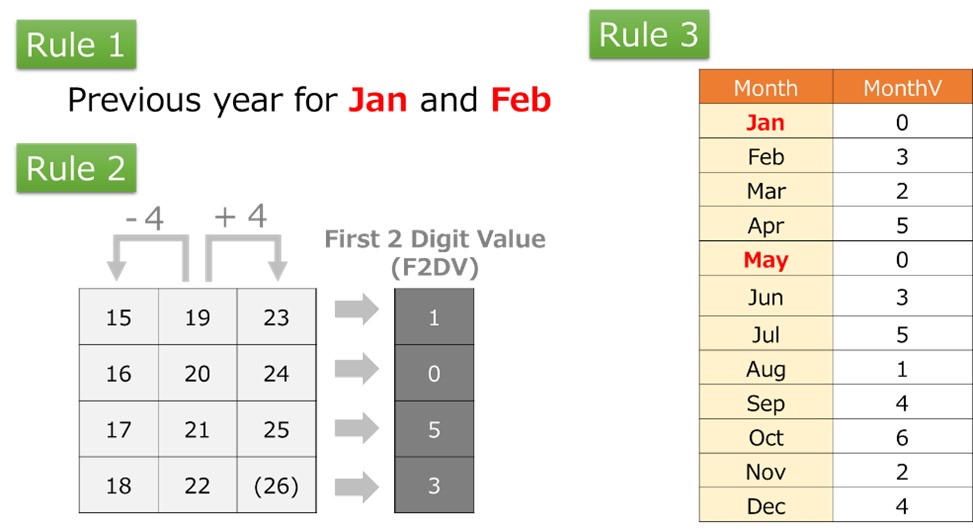 This method is called “one point two five method”.  Table 5 describes the examples of x1.25 method. 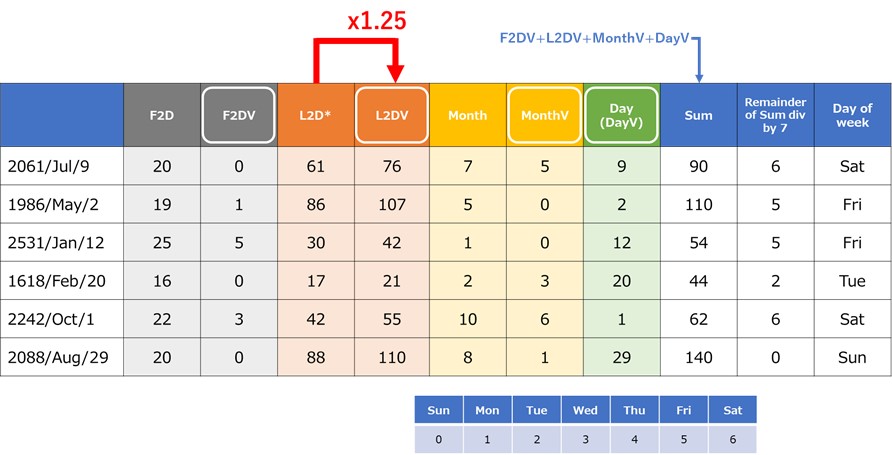 After determination of F2DV, L2DV, MonthV, and DayV, we add up these values.  In the first example, their sum is 90, which is divided by 7, whose remainder is 6.  This remainder corresponds to the day of the week, which is Saturday. 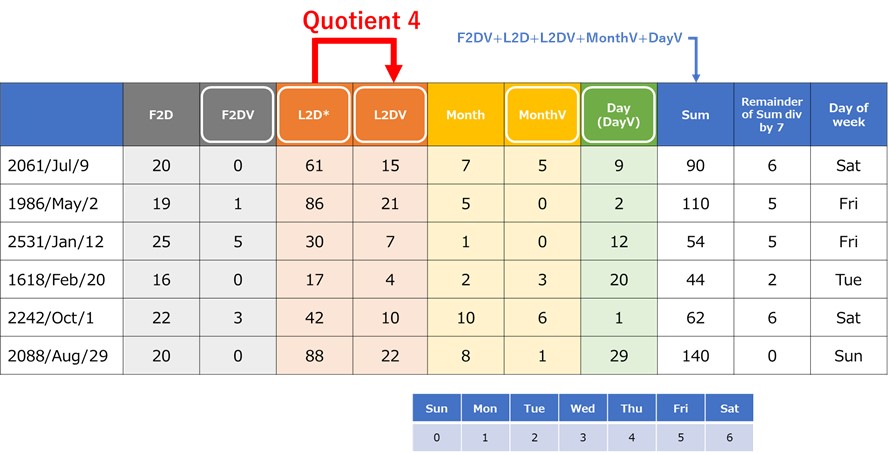 After determination of F2DV, L2DV, MonthV, and DayV, we add up Last two digit and these values.  We will get the same total value as one of x1.25 method, 90.  The total value is divided by 7 and its remainder, 6, represents the day of the week, Saturday.  The rest of the examples can be calculated in the same way.

Ordinary people think that this method is easier than x1.25 method, since the multiplication of 1.25 is more difficult than division of 4.  However, this method is still troublesome.

For the day calculation learner, this method is highly recommended.

The principle behind is to convert Last two digit to an equivalent and small number by using one of 28, 56, and 84.

As seen in Figure 5, the Last two digits are reduced to small numbers.  For instance, 89 is converted to 5.  In calendar calculation, 89 and 5 are mathematically equivalent. 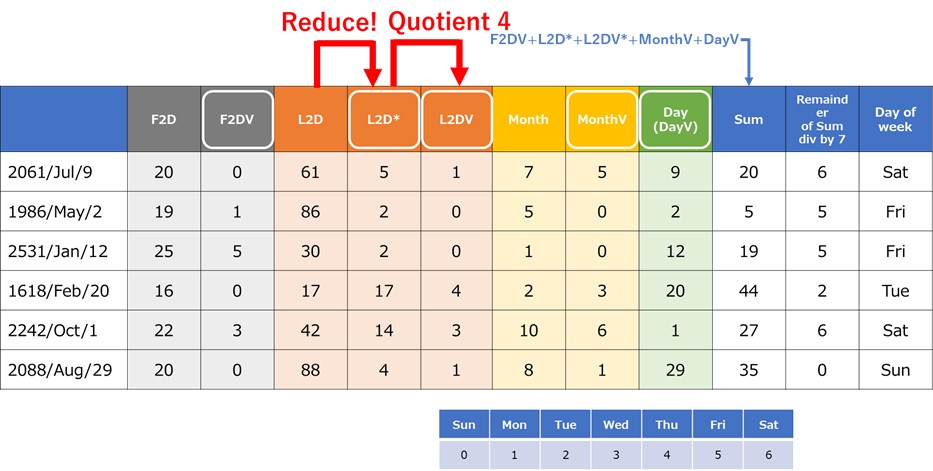 As described before, the essence of the day calculation is “how to calculate L2DV”.  If we memorize all of L2DV and recall them, we do not need to process any calculation in our brain.  This is Full memorization method. 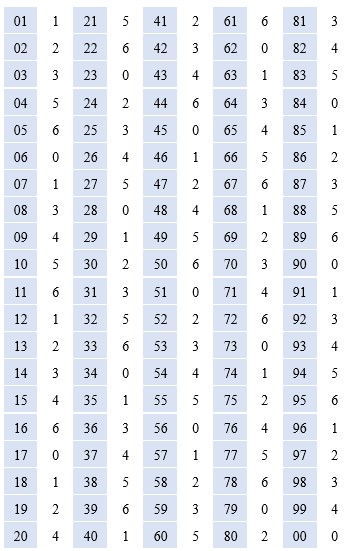 Table 9 describes the examples of Full memorization method. In order to obtain L2DV, we merely recall L2DV. It would take a great deal of training to achieve this memorization. Ordinary persons may think this method is for someone who has special talent. 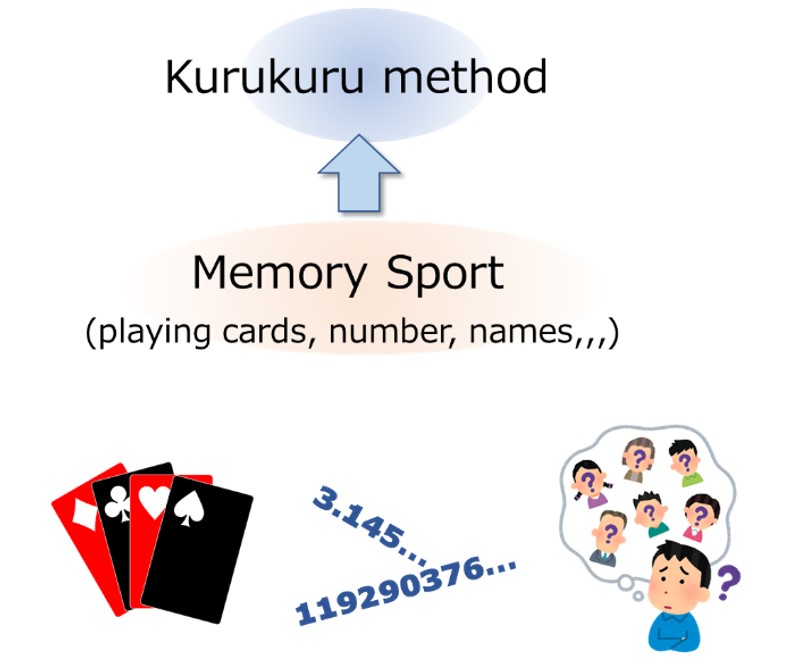 Figure 6. Kurukuru is based on Memory Sport

Kurukuru method utilizes some techniques of memory sport.  Memory sport refers to competitions in which participants attempt to memorize then recall different forms of information, under certain guidelines.  Memory sport has various competition event, such as playing card, number, names, and so on.

Memory palace (aka. Memory of loci) is frequently used in Memory sport.  This is very useful technique for memorization.  The human brain has an excellent ability to memorize visualized things by associating them with location information.

At first, we decide own 7 places.  Each place has a unique number from 0 to 6. 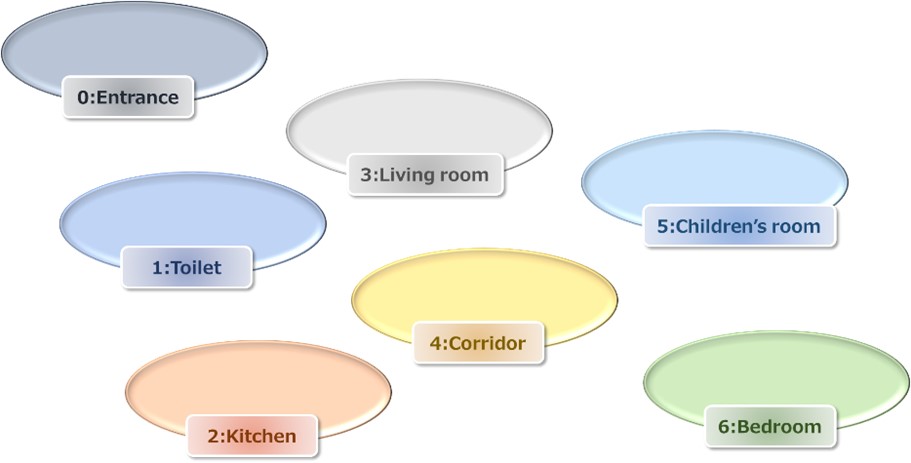 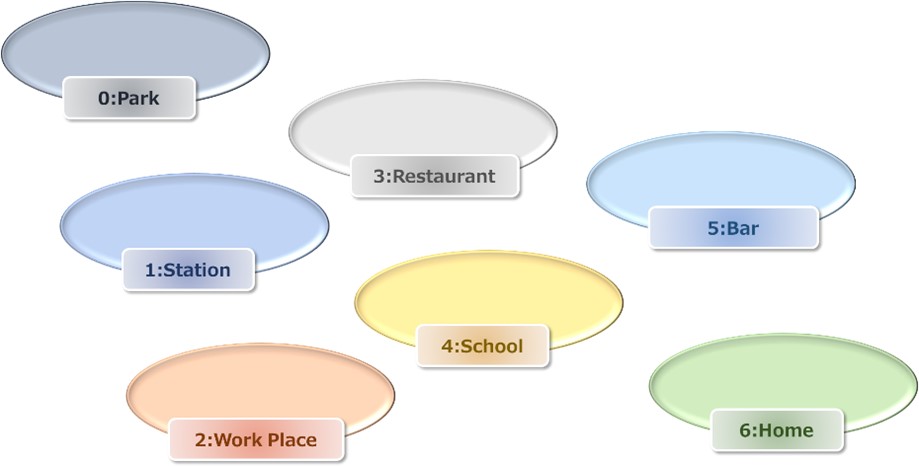 Figure 9 Another example of 7 places

It is recommended to select seven familiar places.  They should be distinguishable.  For instance, the selection of both “high school” and “elementary school” is not advised since their images are overlapped (e.g. places to study). 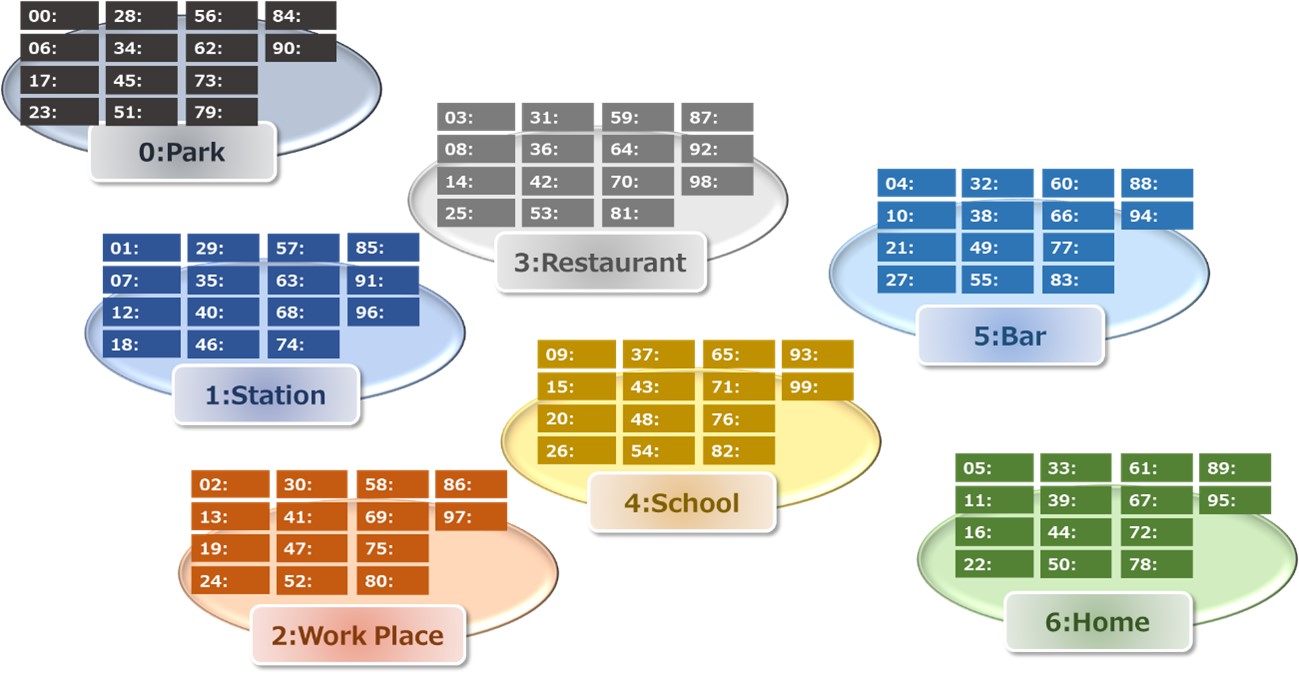 The major system is a mnemonic technique used to aid in memorizing numbers.  The system works by converting numbers into consonants, then into words by adding vowels. The system works on the principle that images can be remembered more easily than numbers.  There are lots of websites introducing Major system, so it is recommended to refer to them.  Major system help you memorize any numbers, such as credit card number, telephone number, birthdays of all of your friends, and so on.  If you have not mastered it, I strongly recommend you start master this technique to enrich your life! 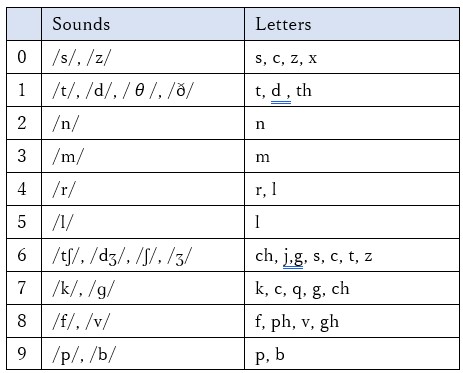 We can prepare our own Major system table according to individual preference.  There are several tips in doing this.  One of them is to avoid overlapped images.  For example, lion (52) and puma (93) are conceptually similar, so they may be mistaken.  Furthermore, we should use “unfavorite” object/person’s name for Major system table.  This is because our brain may keep the unfavorite things rather than favorite things. 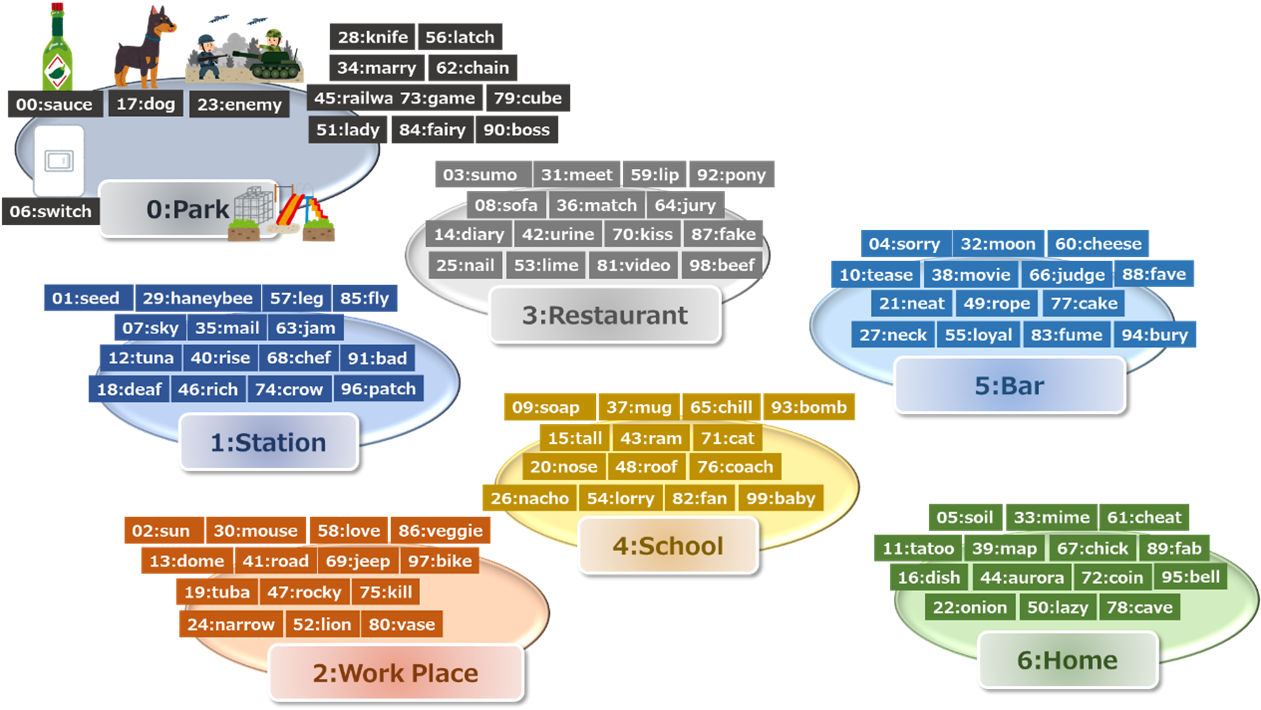 It is noted that this Kurukuru Method exploits the properties of the brain, where are: 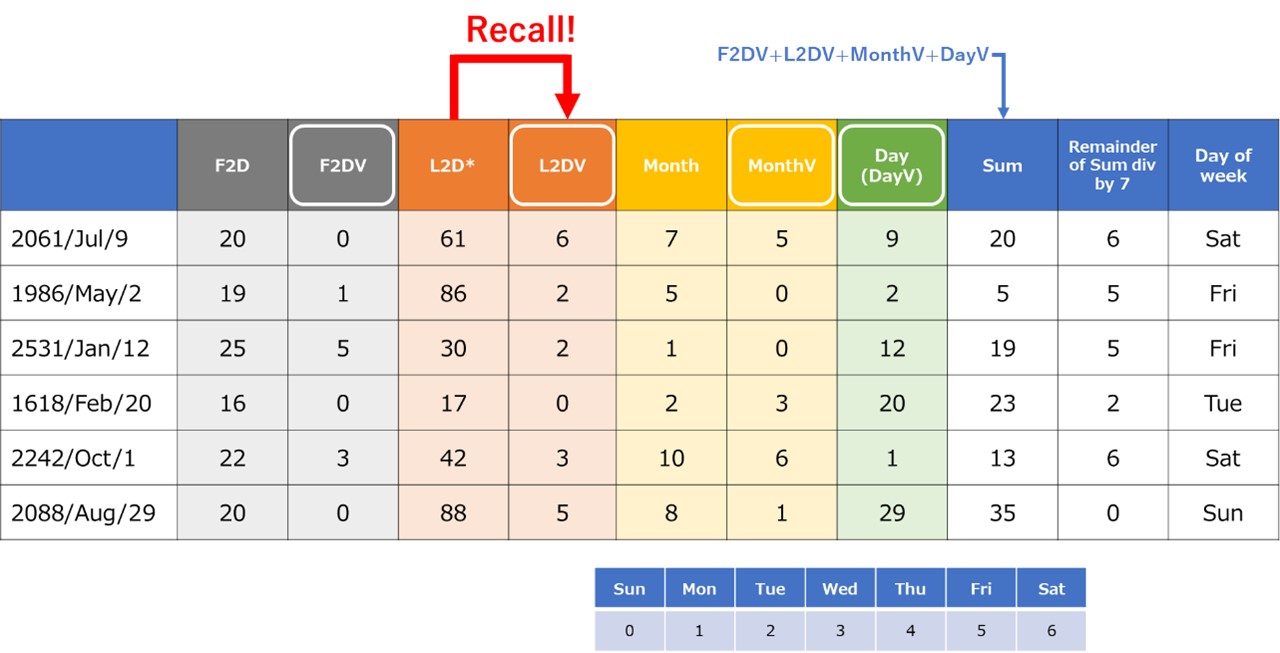 One of the drawbacks of Kurukuru method is to memorize 100 objects.  It is too many for the beginners.  In order to reduce the number of objects for these people, a preprocessing is conducted using 28/56/84 method.

Table 13 describes the examples of Simplified Kurukuru method.  Same as 28/56/84 method, a preprocessing, which is the subtraction of 28/56/84, is conducted before recalling.  By doing this, we do not need to memorize 100 objects in advance. 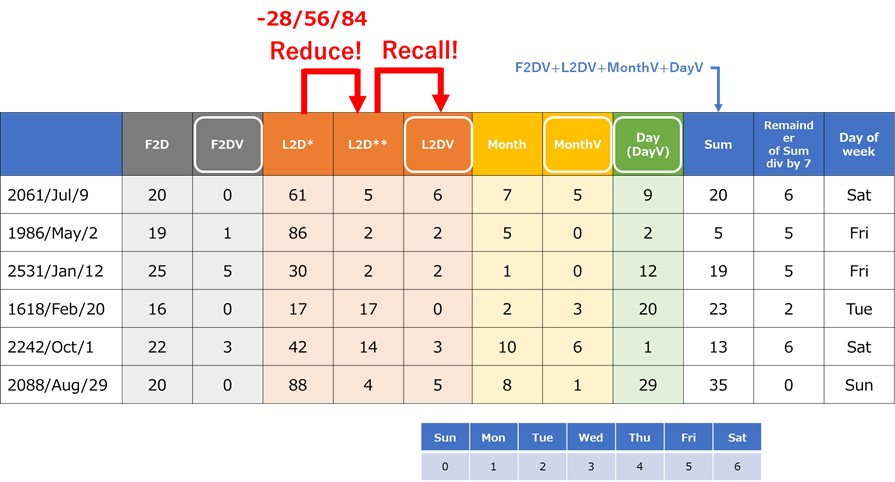 There are several techniques to realize the fast calculation.  The order of calculation should be DayV, MonthV, L2DV, and F2DV.  This is because it is easy to adjust Last 2 digit in case of January and February.  During this process, we find the lucky parts in Date, which corresponds to Zero calculation.  See Fig. 14.

Further technique is heptadecimal notation.  For some people, including Author of this paper, can subtract 1 much faster than add 6.  Some people think that Subtraction of 2 is better than addition of 5.

You will be able to conduct faster calculation using these techniques. 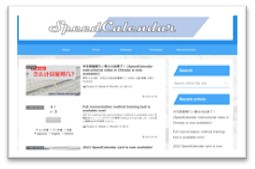 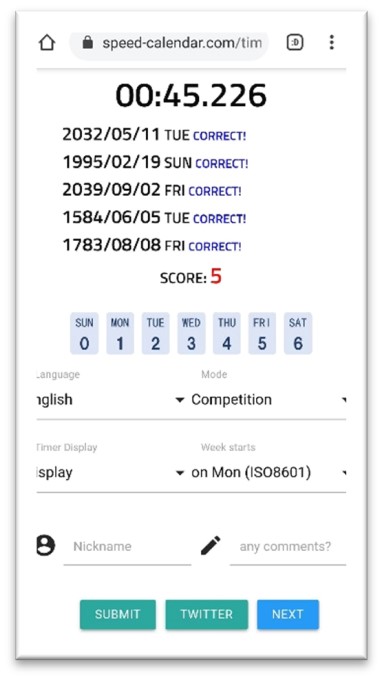 There are several software which is related to day calculation. 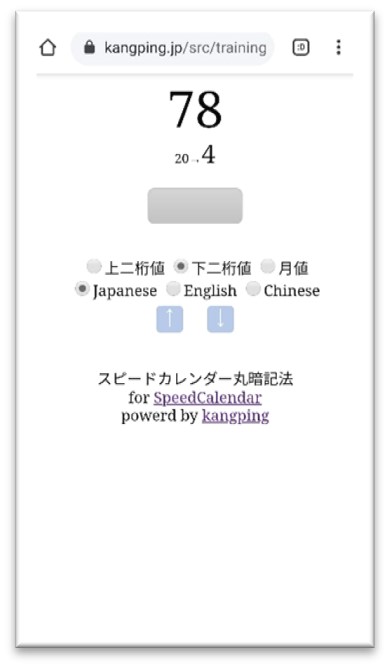 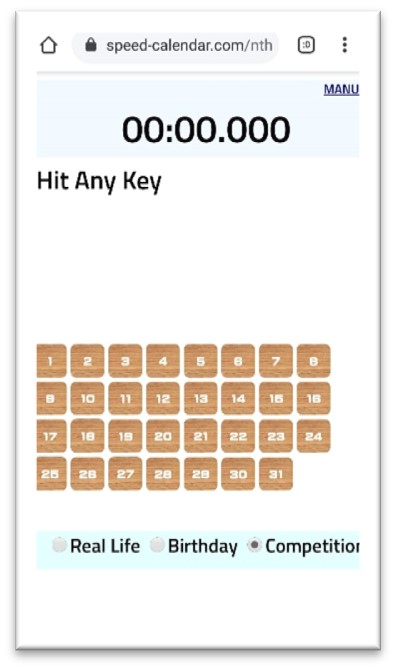 In this thesis, the remainder 0 corresponds to Sunday.  It is noted that other systems are used in computer science as described Table 15.

This thesis describes various methods for calculating the day of the week.  A newly proposed method, “Kurukuru method” is also proposed therein.  I hope you enjoy the content of this thesis and you join our activities, such as SpeedCalendar competition.

Yuichi Hamada, a support of SpeedCalendar

A thesis corresponding to this page is uploaded to Github.

SpeedCalendar is a mental training activity in relation to Calendar system.  We compete our speed (time) to calculate the day of the week.

How to calculate Day of Week